My How and Why: setup.py

When I was first figuring out how to publish a project to PyPI, one of the more confusing things about the process was the purpose of all the various arguments to setuptools.setup. requires versus install_requires, packages versus provides, that huge list of trove classifiers… it was really hard to figure out what arguments I needed to include, and what I should put in them.

I’ve now gotten to a point where I’m comfortable with my setup.py, at least for the straightforward use-cases that my projects to date represent. (Just in time for PyPA to start working toward obsoleting the whole setup.py paradigm…) Here’s the setup.py from a recent work-in-progress commit to one of my projects, sphobjinv:

In this post, I’ll go through it piece by piece, noting what each chunk does (as of this writing: ~May 2018 and setuptools v38.5.1) and why I’ve set it up that way. In all likelihood there are some things missing that should really be there, but it seems to be working well enough for now. More complex projects may need a more complex setup.py, but this should suffice for simple ones.

To note: Kenneth Reitz has a pretty substantial tutorial for setup.py posted as a GitHub repo; that may work better for some.

Straightforward. Have to import setup or else there’s little point.

This is part of a define-once strategy for my project version number: when I bump my version in __init__.py, it’s automatically bumped here, too. See the version argument further down.

I use the same README.rst to populate my GitHub and PyPI descriptions. GitHub picks up the README file automatically; for PyPI, it gets passed to long_description—see below. (Note: PyPI/Warehouse now supports MarkDown for long_description!)

Trailing commas on the arguments below are omitted for brevity.

This is the name of the project on PyPI, and is what users will pass to pip install to download it.

This applies the ‘define-once’ version number imported above.

This sets the ‘short description’ for the project that appears in the lower part of the page header (click any image to enlarge): 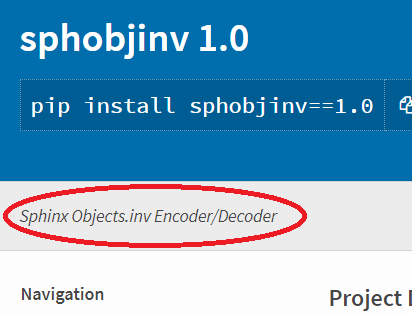 This description also appears with the project in search results:

This provides the content for the verbose description of the project, on the project’s PyPI homepage (https://pypi.org/project/[projectname]):

As noted above, readme() is a helper function to load the contents of README.rst into this argument.

NOTE: The now-obsolete legacy PyPI system would automatically search uploaded projects for a README.rst and use it as the long_description; Warehouse, its replacement, does not do this. If you don’t explicitly set long_description in your setup.py, you won’t get a detailed description on your PyPI project page (e.g., as happened here).

Homepage for the project. If url links to a GitHub repo, some repository statistics will be provided in the sidebar: 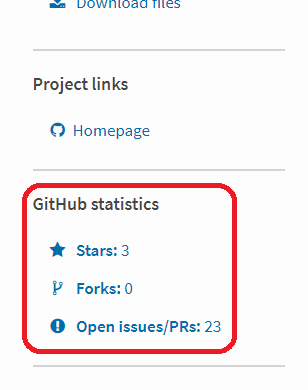 This information is used to populate a ‘Meta’ block in the sidebar of the project page.

On first blush these seemed redundant, but their purpose is distinct. packages is (essentially) required, and tells setup.py which Python packages it should look for in the local project directory, to include in an sdist, bdist_wheel, or other distribution. provides is an optional metadata field, indicating to a user what packages are provided by the project. I think provides might be used internally by pip &c., to see if a dependency for package p is met by project x. But, this starts to muddle my mental distinctions between packages and projects, so I’m not too confident here. I do usually set provides, though, just in case.

python_requires declares a requirement for the version of Python used to invoke setup.py. If the interpreter version does not satisfy the conditions given, install of the project will fail. See the setuptools docs for more information, in particular for the syntax for compound version-requirement statements.

Loosely similar to packages/provides, AFAICT requires is purely a metadata field, used to declare rather than enforce the project’s dependencies. Conversely, install_requires imposes strict dependency requirements for installation of the project; pip will attempt to auto-install everything in install_requires when installing the project.

Aside from the differences in the version number syntax, most of the time my requires and install_requires are identical. The main exception is for projects with dependencies that are difficult for pip to install in some situations—the most common case is a dependency with C extensions that require compilation (e.g., numpy), which is a nightmare on Windows. In these cases, I would include numpy in requires, but leave it out of install_requires, with the responsibility falling on the user to install it themselves. (I might also then include an import-time check fornumpy in the package itself.) The trend toward major projects like numpy uploading Windows bdist_wheels with each release is making this less of an issue, however.

The classifiers are selected from a pre-defined list and serve to, well, classify a project in a number of different categories. When searching pypi.org, these classifiers can be used to narrow search results, to more easily find relevant projects: 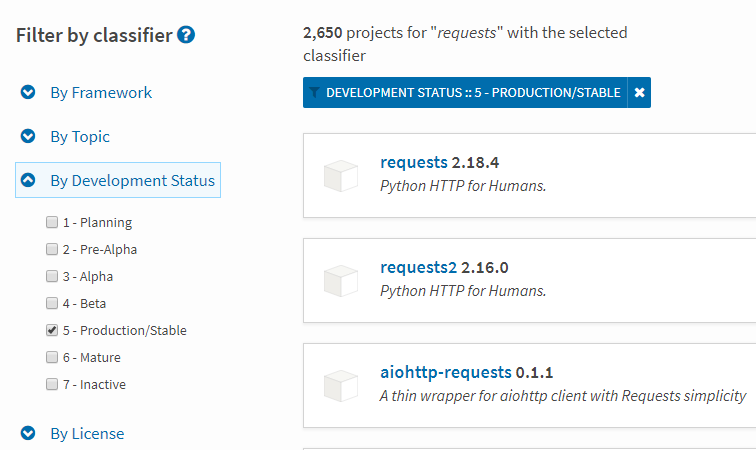 As can be seen above, the first field/level of the classifier shows as a menu of filtering options on PyPI. The second and subsequent levels show as checkboxes in the filtering options. Just because a deeper classifier is specified for a project DOES NOT MEAN that all ‘parents’ of that classifier are automatically applied to the project! If you want your project to show up under searches for, e.g., any of Python, Python :: 3, Python :: 3.6, and Python :: 3 :: Only, then you have to explicitly include all of them in your setup.py, as I’ve done above.

If your project has a commandline interface, entry_points is how you tell setup what you want that CLI command to be called, and where to hook it into your code. When someone pip installs your project, it will automatically create a script and put it on your path. (entry_points can do more than this—search for ‘entry_points’ here—but it’s the only thing I’ve used it for to date.) In my hands, most of this is boilerplate; the key line is the 'sphobjinv = sphobjinv.cmdline:main'. AFAIK this ‘pseudo-assignment’ needs to be a string; the name before the = will become the name of the autogenerated script, and the remainder points to the function that the script should call: package.subpackage:function