My How and Why: pyproject.toml & the 'src' Project Structure

wrote a new post in March 2020 providing further background on PEP517/518 and pyproject.toml, and showing a couple of examples of minimal configurations for using setuptools with pyproject.toml.

UPDATE 3 (4 Feb 2020): It’s been brought to my attention that Google is returning this post near the top of the results list for a variety of Python packaging-related keywords (ummm…yikes?!). As the post is written assuming a fair bit of Python packaging knowledge, here are a few links to some introductory material for the unfamiliar:

, editable installs are again allowed in the presence of pyproject.toml. Both the pip install -e . and python setup.py develop approaches should now work. Discussion is ongoing on a more robust, setuptools-independent specification of editable installs.

UPDATE (26 Apr 2019): Just like with many others in the Python ecosystem, I was caught by the switch to rigorous observance of PEP517 in pip 19.1, which prohibits editable installs in projects declaring PEP517 compliance via the presence of pyproject.toml. However, I discovered that switching from a pip-mediated editable install to a setuptools-mediated ‘develop’ install (via python setup.py develop) seems to have bypassed the problem. Edits/updates have been made below where relevant.

At various points over the last year or so, I’d heard or seen various things about the new pyproject.toml file and how it interacts with Python packaging—in particular, I’d listened to the Python Bytes

and Test and Code

episodes that covered it. I’d also paid passing attention to the various debates about the merits of the src and non-src approaches to structuring projects. The most compelling argument I’d seen for src was made by Hynek Schlawack 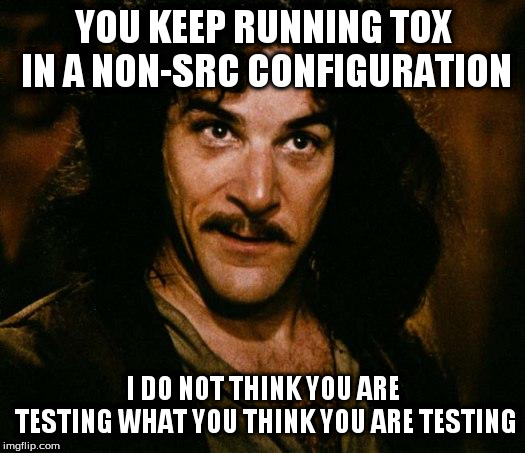 I’d tried moving my code to src a couple of times, but it promptly broke things every time and I never cared enough to bother with figuring it out. When I recently came across Bernat Gabor’s three-part series on the state of Python packaging (covered not long ago on Python Bytes), though, it got me curious enough to seriously attempt a conversion both to pyproject.toml and a src project layout. I needed to tweak one of my Python packages and put out a new patch version anyways (stdio-mgr

), so it seemed like a natural time to put in the work to get these in place. The main resources I used in this process were Bernat’s series, the above article by Hynek, and Brett Cannon’s article on PEP 517/518.

In the end, as far as I can tell my problems boiled down to two things:

Ultimately, what makes me really glad I looked into this was realizing that I had been shipping broken sdists to PyPI. (Time for some fun with pip install --no-binary, *sigh*…) Turns out it was a highly useful thing that tox builds and installs the package to test from sdist, as opposed to just installing from a wheel, because it made it very clear to me that I had been doing The Wrong Thing™.

An unanticipated knock-on benefit from making both of these changes has been that I can now just include -e . explicitly in my requirements-dev.txt to install the project in developer mode as part of my dev virtualenv. Thus, I only need to invoke one command, pip install -r requirements-dev.txt, to set up the virtualenv, instead of having to then follow with a pip install -e . (I’m sticking with the requirements.txt paradigm mainly because I don’t know how otherwise to specify custom dependencies for Read the Docs builds.)

(While dealing with the pip 19.1 behavior change, I removed -e . from my requirements files, and instead ran python setup.py develop to install the package working tree into the relevant environment after calling pip install. For my local working directory, I just ran the command manually; for CI, I inserted it as a separate command in the pre-test phase of the build (install for Travis).)

Below is some commentary on the various files relevant to the changes I made. The files below are in the state of this commit, except where revised due to the pip 19.1 strict enforcement of PEP517.

Per the PEP 517 and PEP 518 specs, the following two lines in the [build-system] option block are the primary reason for introduction of pyproject.toml:

I’m still just using the setuptools build workflow, so wheel and setuptools naturally are build requirements. I also needed attrs at the time I attempted this conversion so that from stdio_mgr import __version__ didn’t break when setup.py is executed. (This import-via-the-package approach to single-sourcing the version number is #6 in the list put out in the Python Packaging Guide… I’m not really a fan of the path manipulation hijinks required to make this method work in the src configuration, though (see setup.py, below), so I’ve actually already switched to option #3 in the dev branch of the project.)

I found it distinctly handy to be able to include my black configuration in here as well; specifying line length and include/exclude patterns:

black uses a regex filter, so that __pycache__ in exclude matches any cache folder throughout the project. Note also that the names of items as generated from black’s search algoritm always have a leading backslash, which has to be accounted for when constructing regexes anchored at the project root. (As an aside, I really like this formatting for multiline regexes with alternative patterns ((...|...|...)), and will be stealing it wholesale.)

I briefly considered also moving my tox config into pyproject.toml, but there’s only a string-key legacy method implemented at the moment, and pytest isn’t able to find its config info within that legacy_tox_ini string.

It looks like recent versions of setuptools automatically add pyproject.toml to the sdist build manifest, along with LICENSE, README, and CHANGELOG-like files. But, for my peace of mind I like to include them explicitly:

As noted above, since my build requirements are now successfully specified in pyproject.toml, and pyproject.toml is bundled with the sdist by being included in MANIFEST.in (or by default), I can include -e . in my requirements-xyz.txts and (barring some weird compatibility issues with old versions of Python/pip/setuptools I’ve encountered on CI) a pip install -r requirements-dev.txt just works:

OTOH, if I delete pyproject.toml and try to install, it does NOT work:

As noted above, the strict enforcement of PEP517 in pip 19.1 disallowed editable installs:

In some (many? most?) cases, a separate invocation of python setup.py develop appeared to work as an alternative to the pip-mediated -e . editable install:

This approach worked smoothly for both of my projects that I’d already converted to the src layout and PEP517 build system. As noted above, I would just run the setup.py develop command manually for my local development trees, and had added it as an extra install step in .travis.yml for CI.

For pip versions 19.1.1 and above, the pip install -e . approach again works without issue.

In order to have tox build the package under test in isolation from the development code, I added the standard:

Also, I realized that all of my test environments specifically included an attrs version:

In the absence of pyproject.toml and isolated_build=True, this has the potential to mask any problems arising from an incorrectly-specified build environment, because with isolated_build=False, tox installs everything in the deps BEFORE it installs the built package to be tested.

Thus, for example, if I delete pyproject.toml and remove isolated_build from tox.ini, the following tox invocation completes successfully:

BUT, say I define a new tox environment with no deps, for the sole purpose of ensuring that the built package installs into and imports from within a clean enviroment without error:

With no pyproject.toml and isolated_build=False, this tox environment FAILS:

With pyproject.toml restored and isolated_build=True, though, it works fine:

FWIW, as a final point I’ll note that I also just folded my pytest configuration into tox.ini, rather than creating a new pytest.ini or setup.cfg:

I figure I’ll probably keep pytest config in here in general, even if it grows, to avoid creating the extra file.

Only minor things to point out here, save for noting again that it was critical to define package_dir in order for setuptools to grok the project source correctly.

Since I was still using the import-through-the-project approach to single-source versioning at the particular commit I’m talking about here, I did have to do some path hijinks in order to access the __version__ defined within src/stdio_mgr/__init__.py:

As noted above, I have since switched to single-source-version option #3 in the dev branch of the project:

(NOTE (2019-06-12): I realized recently that the above construction is unnecessarily complicated—the unpacking of the list literal is superfluous. This would be much more cleanly written as .join("src", "stdio_mgr", "version.py"). I think the unpacking must have been left over from something else I was fiddling with…?)

I could have moved a bunch of the configuration options to setup into setup.cfg, but I’d rather not create yet another new file for only this single purpose. If setuptools gets an update such that arguments to setup could be sited in pyproject.toml, I would strongly consider shifting them over there.